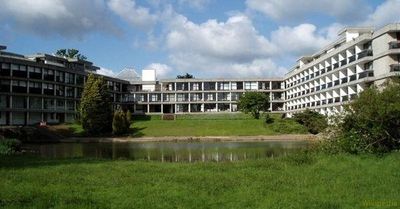 Wolfson College () is a constituent college of the University of Oxford in England. Located in north Oxford along the River Cherwell, Wolfson is an all-graduate college with over sixty governing body fellows, in addition to both research and junior research fellows. It caters to a wide range of subjects, from the humanities to the social and natural sciences. Like the majority of Oxford's newer colleges, it has been coeducational since its foundation in 1965.
The liberal philosopher Sir Isaiah Berlin was the college's first president, and was instrumental not only in its founding, but establishing its tradition of academic excellence and egalitarianism. The college houses The Isaiah Berlin Literary Trust and the annual Isaiah Berlin Lecture. The current president of the college is Tim Hitchens.