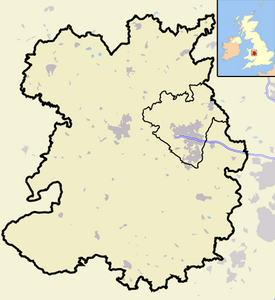 North Shropshire was a local government district in Shropshire, England. The district council was based at Edinburgh House, in Wem. Other settlements included the towns of Ellesmere, Market Drayton, Wem and Whitchurch, as well as the large villages of Shawbury and Baschurch. The district bordered onto Wales, Cheshire and Staffordshire as well as the Shropshire districts of Oswestry, Shrewsbury and Atcham and the unitary Telford and Wrekin.

The district was formed on 1 April 1974, under the Local Government Act 1972, by a merger of Market Drayton Rural District and North Shropshire Rural District. In 2008, it was entirely surrounded by boroughs .