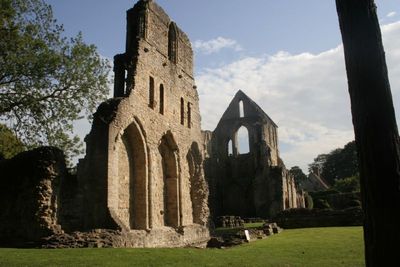 Wenlock Priory, or St Milburga's Priory, is a ruined 12th century monastery, located in Much Wenlock, Shropshire, at grid reference SJ625001. The foundation was a part of the Cluniac order, which was refounded in 1079 and 1082, on the site of an earlier 7th century monastery, by Roger de Montgomery. It is thought to be the final resting place of Saint Milburga, whose bones were reputedly discovered during restoration work in 1101.
Parts of the building became a house later known as "Wenlock Abbey", which is privately owned, but most of Wenlock Priory is open to the public under the care of English Heritage and is used mostly for recreational purposes. The grounds have a collection of topiary.