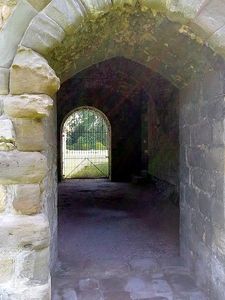 Buildwas Abbey was a Cistercian monastery located on the banks of the River Severn, at Buildwas, Shropshire, England - today about two miles west of Ironbridge. Founded by the local bishop in 1135, it was sparsely endowed at the outset but enjoyed several periods of growth and increasing wealth: notably under Abbot Ranulf in the second half of the 12th century and again from the mid-13th century, when large numbers of acquisitions were made from the local landed gentry. Abbots were regularly used as agents by Plantagenet in their attempts to subdue Ireland and Wales and the abbey acquired a daughter house in each country. It was a centre of learning, with a substantial library, and was noted for its discipline until the economic and demographic crises of the 14th century brought about decline and difficulties, exacerbated by conflict and political instability in the Welsh Marches. The abbey was suppressed in 1536 as part of the Dissolution of the Monasteries under Henry VIII. Substantial remains of the abbey church and monk's quarters remain and are in the care of English Heritage.
Buildwas Abbey was a Cistercian house, although originally founded as a Savigniac monastery in 1135 by Roger de Clinton , Bishop of Coventry and Lichfield. The short-lived Savigniac congregation was a reformed and ascetic branch of the Benedictine Order, centred on the Abbey of Savigny in Normandy, and dating only from 1112.