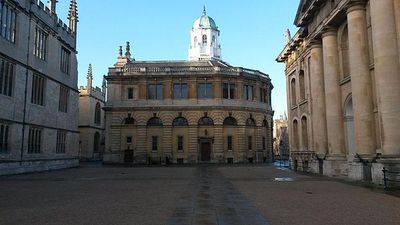 The Sheldonian Theatre, located in Oxford, England, was built from 1664 to 1669 after a design by Christopher Wren for the University of Oxford. The building is named after Gilbert Sheldon, chancellor of the University at the time and the project's main financial backer. It is used for music concerts, lectures and University ceremonies, but not for drama until 2015 when the Christ Church Dramatic Society staged a production of The Crucible.
What came to be known as the Sheldonian Theatre was Wren's second work and was commissioned by Gilbert Sheldon, Archbishop of Canterbury. With the triumph of the Restoration and with it the Church of England, Dean Fell, Vice-Chancellor of the University, sought to revive a project proposed in the 1630s by the late William Laud, Archbishop of Canterbury: a separate building whose sole use would be graduation and degree ceremonies.