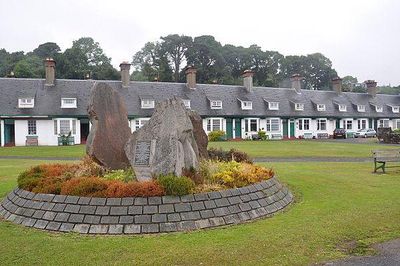 The Isle of Arran or simply Arran is an island off the coast of Scotland. It is the largest island in the Firth of Clyde and the seventh largest Scottish island, at 432 square kilometres . Historically part of Buteshire, it is in the unitary council area of North Ayrshire. In the 2011 census it had a resident population of 4,629. Though culturally and physically similar to the Hebrides, it is separated from them by the Kintyre peninsula. Often referred to as "Scotland in Miniature", the island is divided into highland and lowland areas by the Highland Boundary Fault and has been described as a "geologist's paradise".
Arran has been continuously inhabited since the early Neolithic period. Numerous prehistoric remains have been found. From the 6th century onwards, Goidelic-speaking peoples from Ireland colonised it and it became a centre of religious activity. In the troubled Viking Age, Arran became the property of the Norwegian crown, until formally absorbed by the kingdom of Scotland in the 13th century. The 19th-century "clearances" led to significant depopulation and the end of the Gaelic language and way of life. The economy and population have recovered in recent years, the main industry being tourism. There is a diversity of wildlife, including three species of tree endemic to the area.