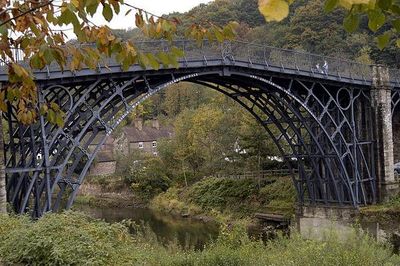 The Ironbridge Gorge is a deep gorge, containing the River Severn in Shropshire, England. It was first formed by a glacial overflow from the long drained away Lake Lapworth, at the end of the last ice age. The deep exposure of the rocks cut through by the gorge exposed commercial deposits of coal, iron ore, limestone and fireclay, which enabled the rapid economic development of the area during the early Industrial Revolution.
Originally called the Severn Gorge, the gorge now takes its name from its famous Iron Bridge, the first iron bridge of its kind in the world, and a monument to the industry that began there. The bridge was built in 1779 to link the industrial town of Broseley with the smaller mining town of Madeley and the growing industrial centre of Coalbrookdale.