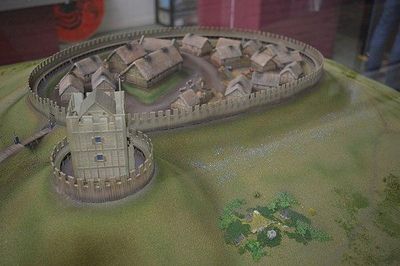 Dundonald Castle is situated on a hill overlooking the village of Dundonald, between Kilmarnock and Troon in South Ayrshire, Scotland. Dundonald Castle is a fortified tower house built for Robert II on his accession to the throne of Scotland in 1371 and it was used as a royal residence by Robert II and his son Robert III.

The present castle stands on land where evidence suggests there was a hill fort. It is thought that a mixture of large timber-built roundhouse and straight-sided structures occupied the interior. A timber-laced stone rampart defined and defended the fort. The timber lacing caught fire and burnt with such intensity that the surrounding stonework melted, or vitrified. This firing happened about 1000 AD and seems to mark the end of the hill-fort’s existence. It was about this date that the British Kingdom of Strathclyde ceased to exist, being absorbed into the Kingdom of Scotland.