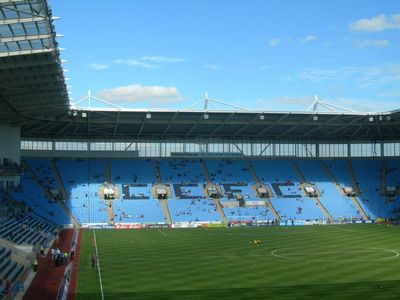 Ricoh Arena (commonly known as the Ricoh) is a stadium complex situated in the Rowleys Green district of the city of Coventry, England, containing a 32,609 seater football stadium, a 6,000m2 exhibition hall, a hotel, a leisure club and a casino. The site is also home to Arena Park Shopping Centre, containing one of the largest Tesco Extra hypermarkets. The site was previously the Foleshill gasworks. The stadium is named after its sponsor, Japanese company Ricoh, which paid £10 million for the naming rights over 10 years. For the 2012 Summer Olympic Games, where stadium naming sponsorship was forbidden, the stadium was known as the City of Coventry Stadium.