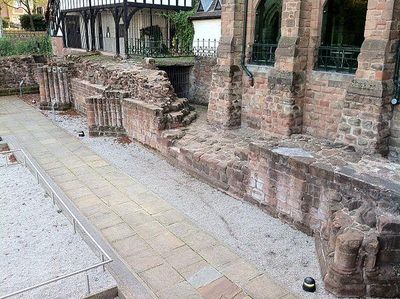 St Mary's Priory and Cathedral was a religious institution in Coventry, England, founded in the 12th century by transformation of the former monastery of St Mary, and destroyed during the Dissolution of the Monasteries in the early 16th century. It was located on a site north of Holy Trinity and the former St Michael's parish churches in the centre of the city, on a site bordered by Priory Row to the south, Trinity Street to the west, and the River Sherbourne to the north. Excavated remains from the west end of the cathedral are open to the public.

The first chronicled event in the history of Coventry took place in 1016 when King Canute and his army of Danes were laying waste to many towns and villages in Warwickshire in a bid to take control of England, and on reaching the settlement of Coventry they destroyed the Saxon nunnery founded by St Osburg. Leofric, Earl of Mercia and his wife Lady Godiva rebuilt on the remains of the nunnery to found a Benedictine monastery in 1043 dedicated to St Mary for an abbot and 24 monks. John of Worcester tells us that "He and his wife, the noble Countess Godgifu, a worshipper of God and devout lover of St Mary ever-virgin, built the monastery there from the foundations out of their own patrimony, and endowed it adequately with lands and made it so rich in various ornaments that in no monastery in England might be found the abundance of gold, silver, gems and precious stones that was at that time in its possession."