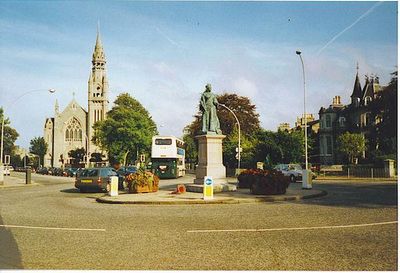 Queen's Cross Church is a congregation of the Church of Scotland. It is located at the intersection of Carden Place and Albyn Place, at Queen's Cross in the heart of Aberdeen's west end business community. It is a short walk from the main
shopping areas of the city and several main hotels. The church was designated as a Category B listed building in 1967 and was upgraded to Category A in 1984.
The Revd Dr Edmund S. P. Jones was minister at Queen's Cross from 1965 until 1983. During his tenure the church experienced a period of significant change and growth: In 1975 the old church manse on Desswood Place was sold and a new manse was purchased nearby on St. Swithin Street; the church facilities were expanded with the construction of a nursery wing in 1971; and the church sanctuary was redesigned and redecorated by architect James Roy for its centenary in 1981.