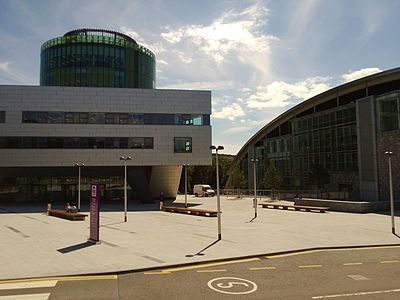 Robert Gordon University, commonly called RGU, is a public university in the city of Aberdeen, Scotland. It became a university in 1992, and originated from an educational institution founded in the 18th century by Robert Gordon, a prosperous Aberdeen merchant, and various institutions which provided adult education and technical education in the 19th and early 20th centuries. It is one of two universities in the city .
According to the 2013 Times Good University Guide it is the best modern university in the UK, while according to The Guardian University Guide 2013 it is the best modern university in Scotland and 2nd-best in the UK. It was shortlisted for Sunday Times University of the Year 2012 and was named Best Modern University in the UK for 2012 by The Sunday Times University Guide. Analysis published by the Higher Education Statistics Agency has indicated that of those who graduated from full-time undergraduate degrees in 2011, 2012, 2013 and 2014, 2015 were in employment or further study within six months - one of the highest of any university in the UK. It was also measured that in undergraduate employability they had a 96.5% employment rate and was rated the best Scottish university for graduate prospects .