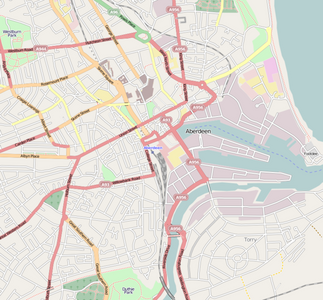 Aberdeen Castle was a late Middle Ages fortification, in Aberdeen, Scotland. It was situated on Castle Hill, a site today known as the Castlegate, and the location of the castle is now occupied by blocks of flats.
It is thought the castle and fortifications were slighted by King Robert the Bruce as was his policy on re-captured castles in June 1308, during the Wars of Scottish Independence immediately following the Harrying of Buchan. Bruce and his men laid siege to the castle before massacring the English Garrison to prevent its use by the English troops of Edward II. It is said the Scots showed no mercy but "slew every man who fell into their hands. Edward I, indeed, had already set the example of executing his prisoners, and it was not to be expected that the other side would fail to follow the same course" However, as in August 1308, Gilbert Pecche and the last troops were allowed to leave Aberdeen, this obviously cannot be accurate. On 10 July 1308, English ships left Hartlepool to help the English garrison.