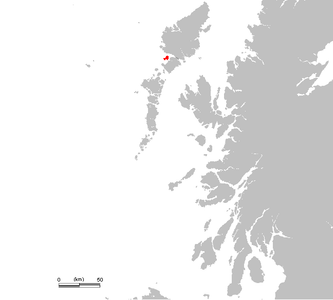 Taransay (Scottish Gaelic: Tarasaigh, pronounced [ˈt̪aɾas̪aj]) is an island in the Outer Hebrides of Scotland. It is famous for being the host of the British television series Castaway 2000. Uninhabited since 1974, except for holidaymakers, Taransay is the largest island in Scotland that lacks a permanent population. It is one hectare larger than Scarba, which is also uninhabited.