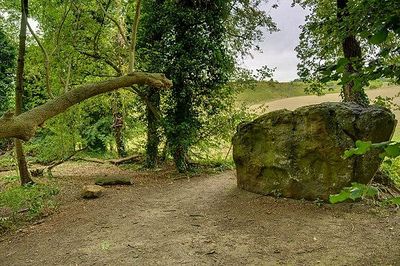 The White Horse Stone is a name given to two separate sarsen megaliths on the slopes of Blue Bell Hill, near the village of Aylesford in the south-eastern English county of Kent. The Lower White Horse Stone was destroyed prior to 1834, at which time the surviving Upper White Horse Stone took on its name and folkloric associations. Various archaeologists have suggested—although not proven—that the stones were each part of chambered long barrows constructed in the fourth millennium BCE, during Britain's Early Neolithic period.

If the White Horse Stones were originally components of chambered long barrows, then they would have been erected by pastoralist communities shortly after the introduction of agriculture to Britain from continental Europe. Long-barrow building was an architectural tradition widespread across Neolithic Europe although comprised various localised regional variants; one of these was in the vicinity of the River Medway, examples of which are now known as the Medway Megaliths. The White Horse Stones lie on the eastern side of the river, along with the chambered long barrows of Little Kit's Coty House, Kit's Coty House, the Smythe's Megalith, and the Coffin Stone, which may be a part of a fourth. Three other examples, the Coldrum Long Barrow, Addington Long Barrow, and Chestnuts Long Barrow, remain on the western side of the river. Excavation has revealed the existence of an Early Neolithic longhouse near to the stone.