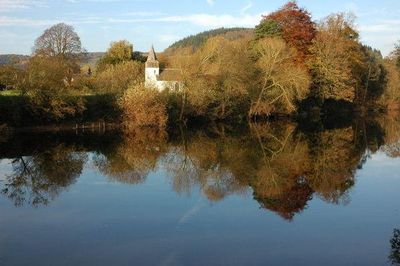 The River Wye is the fifth-longest river in the UK, stretching some 215 kilometres from its source on Plynlimon in mid Wales to the Severn estuary. For much of its length the river forms part of the border between England and Wales. The Wye Valley is an Area of Outstanding Natural Beauty. The Wye is important for nature conservation and recreation.

The meaning of the name is not clear. Possibly the earliest reference to the name is Guoy in Nennius' early 9th Century Historia Brittonum and the modern Welsh name is Gwy. The Wye was much later given a Latin name Vaga, an adjective meaning 'wandering'. The Tithe map references a Vagas Field in both Whitchurch and Chepstow. Philologists such as Edward Lye and Joseph Bosworth in the 18th and early 19th centuries suggested an Old English derivation from wæg, "wave".