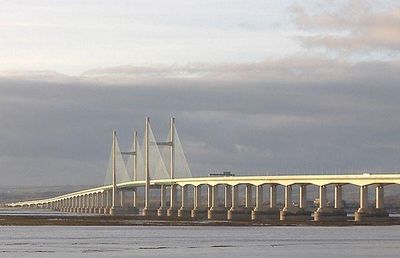 The Second Severn Crossing marks the lower limit of the River Severn and the start of the Severn Estuary. It is further southwest than the Severn Bridge and because it is closer in-line with the landward sides of the M4, it reduces the length of the journey when travelling between England and Wales. The junctions at each end are designed for most traffic to use this crossing, and in order to use the old Severn Bridge crossing, one has to leave the M4 at junction 21 and join the M48 near Aust or at junction 23 near Magor. The new crossing carries more traffic than the Severn Bridge, which is still in use. It is wider than the Severn Bridge, having three lanes and a narrow hard shoulder each way, compared to the two lanes, cycle path and narrow footpath of the original crossing. It is a cable-stayed bridge, whereas the Severn Bridge is a suspension bridge. The position of the bridge is close to that of the Severn Tunnel, which has carried the railway line beneath the river bed since 1886.