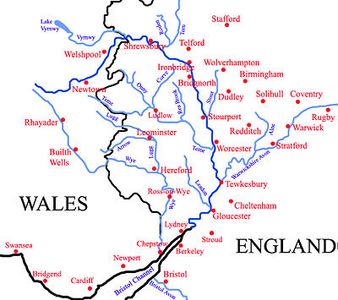 The River Severn is a river in the United Kingdom. At about 220 miles , it is usually considered to be the longest in the UK. It rises at an altitude of 2,001 feet on Plynlimon, close to the Ceredigion/Powys border near Llanidloes, in the Cambrian Mountains of mid Wales. It then flows through Shropshire, Worcestershire and Gloucestershire, with the county towns of Shrewsbury, Worcester and Gloucester on its banks. With an average discharge of 107 m3/s at Apperley, Gloucestershire, the Severn is the greatest river in terms of water flow in England and Wales.
The river is usually considered to become the Severn Estuary after the Second Severn Crossing between Severn Beach, South Gloucestershire and Sudbrook, Monmouthshire. The river then discharges into the Bristol Channel which in turn discharges into the Celtic Sea and the wider Atlantic Ocean. The Severn's drainage basin area is 4,409 square miles , excluding the River Wye and Bristol Avon which flow into the Severn Estuary. The major tributaries to the Severn are the Vyrnwy, Clywedog, Teme, Avon and Stour.