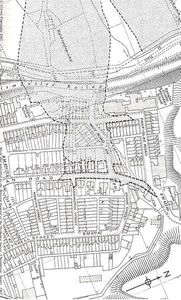 The Aberfan disaster was the catastrophic collapse of a colliery spoil tip at around 9:15 am on 21 October 1966. The tip had been created on a mountain slope above the Welsh village of Aberfan, near Merthyr Tydfil, and overlaid a natural spring. A period of heavy rain led to a build-up of water within the tip which caused it to suddenly slide downhill as a slurry, killing 116 children and 28 adults as it engulfed the local junior school and other buildings. The tip was the responsibility of the National Coal Board , and the subsequent inquiry placed the blame for the disaster on the organisation and nine named employees.

There were seven spoil tips on the slopes above Aberfan; Tip 7—the one that slipped onto the village—was begun in 1958 and, at the time of the disaster, was 111 feet high. In contravention of the NCB's official procedures, the tip was partly based on ground from which water springs emerged. After three weeks of heavy rain the tip was saturated and approximately 140,000 cubic yards of spoil slipped down the side of the hill and onto the Pantglas area of the village. The main building hit was Pantglas Junior School, where lessons had just begun; 5 teachers and 109 children were killed in the school.