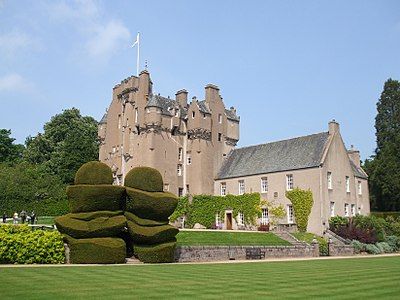 Crathes Castle is a 16th-century castle near Banchory in the Aberdeenshire region of Scotland. This harled castle was built by the Burnetts of Leys and was held in that family for almost 400 years. The castle and grounds are owned and managed by the National Trust for Scotland and are open to the public.
In the 14th and 15th century the Burnett of Leys built a fortress of timbers on an island they made in the middle of a nearby bog. This method of fortification, known as a crannog, was common in the Late Middle Ages. Construction of the current tower house of Crathes Castle was begun in 1553 but delayed several times during its construction due to political problems during the reign of Mary, Queen of Scots.