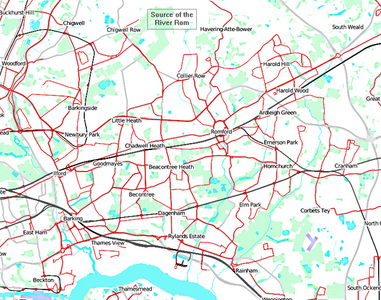 The River Rom, also known as the River Beam below its confluence with the Ravensbourne, is a tributary of the River Thames in England that flows through east London suburbs surrounding the metropolitan centre of Romford, forming the boundary between the London boroughs of Barking and Dagenham and Havering. The Rom is culverted for a brief midsection as it passes through the centre of Romford.

Starting in Essex, the Rom is the continuation of the Bourne Brook after Bournebridge, Stapleford Abbotts in the Epping Forest district of Essex which rises 3 miles northeast at Spring Farm by Stapleford Abbots Golf Course in the Essex Borough of Brentwood. Taking an almost straight south-flowing course, the Rom passes under the London Loop and experiences a drop of 24 metres in elevation before it enters the ringroad enclosed town centre of Romford where it becomes underground in a culvert, a man-made tunnel, at 16m AOD. To the south of the town centre it regains green banks and adjoins the retail park on Rom Valley Way, passes under Roneo Corner, divides two residential estates at 8m AOD and enters Eastbrookend Country Park where it is joined by a tributary, The Ravensbourne, having flowed through Emerson Park and then a park, Harrow Lodge Park from its source in Ardleigh Green. The Rom then continues under the name of the Beam and forms the boundary between the London Borough of Havering and the London Borough of Barking and Dagenham before reaching the River Thames in the Dagenham industrial estate which included the Ford Motor Company Works. The Beam Valley comprises 182 acres of land running the entire stretch of the river. The valley also includes various historical features including tank traps, pillboxes and a section of the old Romford Canal.