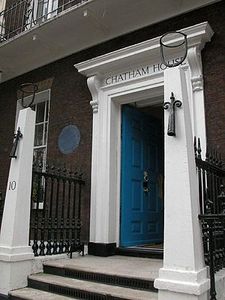 The Royal Institute of International Affairs, commonly known as Chatham House, is a non-profit, non-governmental organisation based in London whose mission is to analyse and promote the understanding of major international issues and current affairs. It is the originator of the Chatham House Rule and takes its name from the building where it is based, a Grade I listed 18th-century house in St. James's Square, designed in part by Henry Flitcroft and occupied by three British prime ministers, including William Pitt, 1st Earl of Chatham.
In the University of Pennsylvania’s 2015 Global Go To Think Tanks Report, Chatham House is ranked the second most influential think tank in the world after the Brookings Institution, and the world's most influential non-U.S. think tank. In 2009, Chatham House was also named the top non-U.S. think tank by Foreign Policy magazine, which listed it as one of the top "scholars" for being among a handful of stars of the think-tank world who are regularly relied upon to set agenda and craft new initiatives.