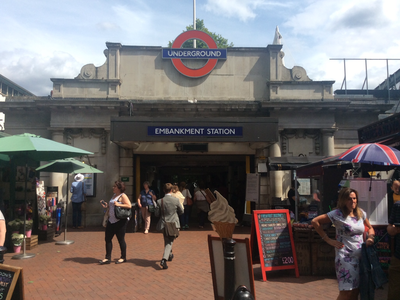 Embankment is a London Underground station in the City of Westminster, known by various names during its history. It is served by the Circle, District, Northern and Bakerloo lines. On the Northern and Bakerloo lines, the station is between Waterloo and Charing Cross stations; on the Circle and District lines, it is between Westminster and Temple and is in Travelcard Zone 1. The station has two entrances, one on Victoria Embankment and the other on Villiers Street. The station is adjacent to Victoria Embankment Gardens and is close to Charing Cross station, Embankment Pier, Hungerford Bridge, Cleopatra's Needle, the Royal Air Force Memorial, the Savoy Chapel and Savoy Hotel and the Playhouse and New Players Theatres.
The station is in two parts: sub-surface platforms opened in 1870 by the District Railway as part of the company's extension of the Inner Circle eastwards from Westminster to Blackfriars and deep-level platforms opened in 1906 by the Baker Street and Waterloo Railway and 1914 by the Charing Cross, Euston and Hampstead Railway . A variety of underground and main line services have operated over the sub-surface tracks and the CCE&HR part of the station was reconstructed in the 1920s. In 2014 major work commenced to replace the 80 year old escalators, they were refurbished once in the 1970. Work to replace them was difficult as they supported the station structure.