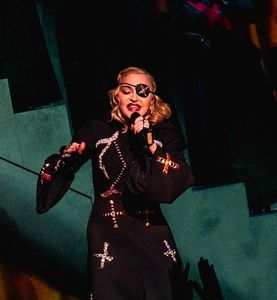 The London Palladium () is a Grade II* West End theatre located on Argyll Street, London, in the famous area of Soho. The theatre holds 2,286 seats. Of the roster of stars who have played there, many have televised performances. Between 1955 and 1969 Sunday Night at the London Palladium was held at the venue, which was produced for the ITV network. The show included a performance by The Beatles on 13 October 1963. One national paper's headlines in the following days coined the term "Beatlemania" to describe the increasingly hysterical interest in the band.
While the theatre has a resident show, it is also able to host one off performances, such as concerts, TV specials and Christmas pantomimes. It has hosted the Royal Variety Performance 43 times, most recently in 2019. In March 2020, the venue closed due to the COVID-19 pandemic's effect on the theatre industry, but reopened over four months later on 1 August 2020.