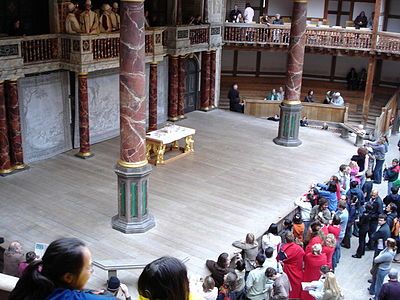 The Theatre was an Elizabethan playhouse in Shoreditch , just outside the City of London. It was the second permanent theatre ever built in England, after the Red Lion, and the first successful one. Built by actor-manager James Burbage, near the family home in Holywell Street, The Theatre is considered the first theatre built in London for the sole purpose of theatrical productions. The Theatre's history includes a number of important acting troupes including the Lord Chamberlain's Men, which employed Shakespeare as actor and playwright. After a dispute with the landlord, the theatre was dismantled and the timbers used in the construction of the Globe Theatre on Bankside.
The Mayor and Corporation of London banned plays in 1572 as a measure against the plague, not wanting to attract crowds of strangers. In 1575 they formally expelled all players from the city. This prompted the construction of playhouses outside the jurisdiction of London, in the liberties of Halliwell/Holywell in Shoreditch and later the Clink, and at Newington Butts near the established entertainment district of St. George's Fields in rural Surrey. The Theatre was constructed in 1576 by James Burbage in partnership with his brother-in-law, one John Brayne, on property that had originally been the grounds of the dissolved Halliwell Priory . Brayne had advanced Burbage the money needed to build The Theatre, and in return, Brayne received a portion of the profits and owned some of the property . The Theatre was in Shoreditch, beyond the northern boundary of the City of London and outside the jurisdiction of civil authorities, who were often opposed to the theatre. This area in the "suburbs of sin" was notorious for licentious behaviour, brothels and gaming houses. A year later the Curtain Theatre was built nearby, making the area London's first theatrical and entertainment district. "When Burbage and Brayne mortgaged The Theatre, Brayne had just recently resolved another fight with one of his brothers-in-law over a different mortgage" Brayne and Burbage had never written a contract, which eventually led to many quarrels concerning who spent what on getting The Theatre started.