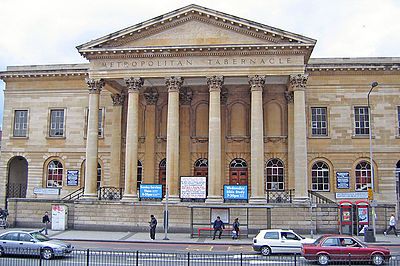 The Metropolitan Tabernacle is a large Independent Reformed Baptist church in the Elephant and Castle in London. It was the largest non-conformist church of its day in 1861. The Tabernacle Fellowship have been worshipping together since 1650. Its first pastor was William Rider; other notable pastors and preachers include Benjamin Keach, Dr. John Gill, Dr. John Rippon, and C. H. Spurgeon. The Tabernacle still worships and holds to its Biblical foundations and principles under its present pastor, Dr. Peter Masters.
The Tabernacle fellowship dates back to 1650, when the English Parliament banned independent Christian organisations from meeting together. This congregation braved persecution until 1688, when the Baptists were once again allowed to worship in freedom. At this point, the group built their first chapel, in the Tower Bridge area.