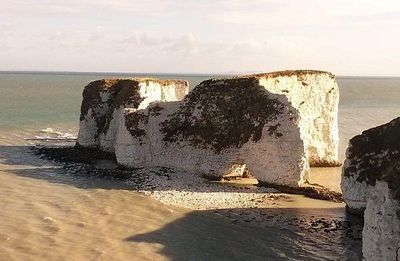 Old Harry Rocks are three chalk formations, including a stack and a stump, located at Handfast Point, on the Isle of Purbeck in Dorset, southern England. They mark the most easterly point of the Jurassic Coast, a UNESCO World Heritage Site.

Old Harry Rocks lies directly east of Studland, about 1.5 miles northeast of Swanage, and about 3 miles south of the large towns of Poole and Bournemouth. To the south are the chalk cliffs of Ballard Down, much of which is owned by the National Trust. The rocks can be viewed from the Dorset section of the South West Coast Path