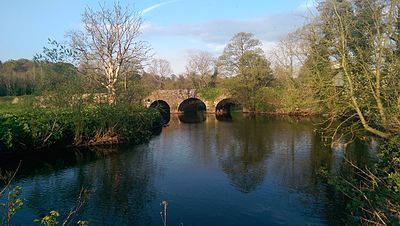 The River Lagan is a major river in Northern Ireland which runs 53.5 miles from the Slieve Croob mountain in County Down to Belfast where it enters Belfast Lough, an inlet of the Irish Sea. The River Lagan forms much of the border between County Antrim and County Down in the east of Ulster. It rises as a tiny, fast-moving stream near to the summit of Slieve Croob; Transmitter Road runs nearby. From here it continues on its journey to Belfast through Dromara, Donaghcloney and Dromore. On the lower slopes of the mountain, it is joined by another branch from Legananny Mountain, just opposite Slieve Croob. At Dromara, about four miles from its source, its height above the sea is 390 ft . As the river continues on its journey to Belfast, it turns east to Magheralin into a broad plain between the plateaus of Antrim and Down.
The river drains approximately 609 square km of agricultural land and flows over 70 km from the Mourne Mountains to the Stranmillis Weir, from which point on it is estuarine. The catchment consists mainly of enriched agricultural grassland in the upper parts, with a lower section draining urban Belfast and Lisburn. There is one significant tributary, the Ravernet River, and there are several minor tributaries, including the Carryduff River, the River Farset and the Blackstaff River. Water quality is generally fair, though there are localised problems and occasional pollution incidents, mainly due to effluent from farms. Work is proceeding to restore a self-sustaining population of Atlantic salmon to the river.