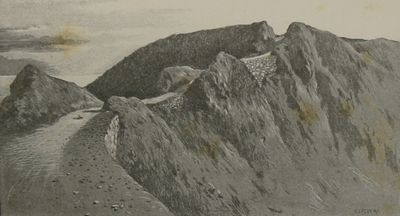 La Coupée is an isthmus joining Great Sark and Little Sark. The land on both sides of this causeway has been eroded away by the sea, and all that now connects Little Sark to the rest of the island is a narrow ridge a mere three metres (nine feet) wide and 90 metres (300 ft) in length, with a drop of close to 80 metres (260 ft) on either side. Until the beginning of the twentieth century, access to Little Sark was extremely difficult or, at best, unnerving. La Coupée was traversed by a narrow dirt track, and children are reputed to have had to crawl across it on their hands and knees to prevent being blown over the edge by the wind. According to a description in 1875, "People have thrown themselves flat on their face, from terror and nervousness on reaching the Coupée; others have lost courage half way across, and have hidden themselves behind the heads of the rocks that crop up in the middle of the Coupée until some passer by came and led them along; others have been unable to get across without shutting their eyes and being led between two persons."