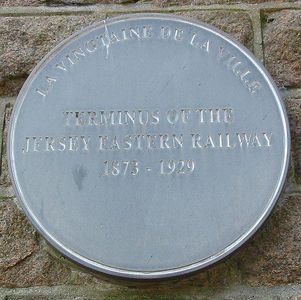 St Helier railway station was the terminus of the Jersey Eastern Railway in Saint Helier, the capital of Jersey in the Channel Islands. Opened in 1874, it was situated in a railway cutting at the base of Mont de la Ville below Fort Regent. The station was referred to as St. Helier to distinguish it from another railway terminus opened by the Jersey Railway in 1873 at the Weighbridge in St Helier. The station was in passenger operation until the line closed in 1929. Today the site is occupied by the Snow Hill car park.
The Jersey Eastern Railway Company was constructed in response to demand by the inhabitants of the harbour town of Gorey following the opening of the Jersey Railway line in the west of the island. The States of Jersey passed an Act authorising the construction of an eastern railway lone from Snow Hill to Gorey, and on to St Catherine on 31 March 1871 and Royal Assent was received in 1872. On 6 April 1873 the Jersey Eastern Railway Company was registered. It had permission to construct a railway from Snow Hill to Gorey, and on to St Catherines. The line took several years to build and the final section to St Catherines was never completed, with the terminus at Gorey Pier opening in 1891.