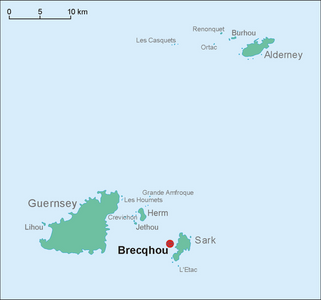 Brecqhou is one of the Channel Islands, located just west of Sark. Brecqhou is politically part of both Sark and the Bailiwick of Guernsey. It has been established in the courts that Brecqhou is a tenement of Sark. The Ministry of Justice, the department of the United Kingdom government with responsibility for the Channel Islands, considers Brecqhou part of Sark.
A mere islet, Brecqhou has a surface area of just 74 acres . The island is separated from Sark by an extremely narrow sound which, according to legend, has only once been traversed by boat in a high tide. In reality it is traversed frequently by yachts during each summer and by fishing boats year round and even forms a part of the route taken by occasional powerboating events in the islands.