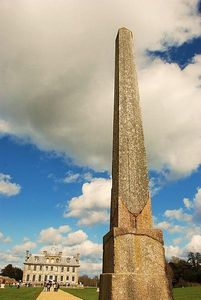 The Philae obelisk is one of twin obelisks discovered in 1815 at Philae in Upper Egypt. It was discovered nearly intact, while its twin had broken into pieces in antiquity. Both were soon afterwards obtained by William John Bankes, an acquisition which included an important bilingual inscription.

He noted two inscriptions on it, one in Egyptian hieroglyphs, and the other in ancient Greek. By comparing the two texts, although they were not translations of one another, Bankes believed that he recognised the names Ptolemy and Cleopatra in hieroglyphic characters. His identification was confirmed afterward by Thomas Young and Jean-François Champollion, and the obelisk was useful to Champollion in his eventual decipherment of Egyptian hieroglyphs.