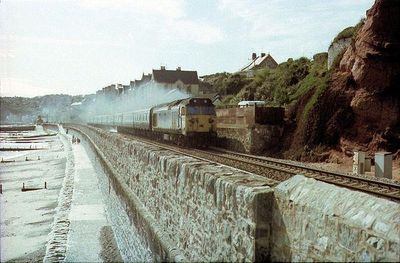 Dawlish is an English seaside resort town and civil parish in Teignbridge on the south coast of Devon, 12 miles from the county town of Exeter. It had a population of 12,345, which decreased to 11,893 at the 2011 census. Since then however, the population has increased to around 16,000 and is expected to grow significantly in the coming years as several large housing estates are currently under construction, mainly in the north and east of the town. During the 18th century, it grew from a small fishing port into a well-known seaside resort. Its nearest neighbour, Teignmouth, developed in a similar way during the 19th century.

Dawlish is located at the outlet of a small river, Dawlish Water , between Permian red sandstone cliffs, and is fronted by a sandy beach with the South Devon Railway sea wall and the Riviera Line railway above. Behind this is a central public park, The Lawn, through which Dawlish Water flows.