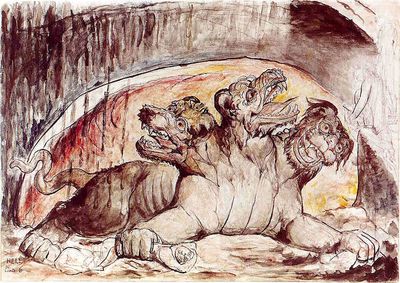 Cape Tainaron or Mattapan, at the southernmost tip of the peninsula, was thought to be one of the entrances to the underworld, where Heracles descended to catch the dog Kerberos or Cerberus.
Whilst in the underworld, Heracles freed Theseus. Heracles presented himself before the throne of Hades and Persephone and asked permission to take Cerberus, to which the gods agreed as long as Heracles did not harm the hound in any way.
In any case, Heracles wrestled the dog into submission and dragged it out of Hades, passing through a cavern entrance.
When he returned with Cerberus to the palace of Eurystheus, King Eurystheus who had assigned the task to Heracles, was so afraid of the fearsome beast that he jumped into a large storage jar to hide. From the spittle of the dog which fell upon earth, the first poisonous plants were born, including deadly aconite (also known as monkshood or wolfsbane).