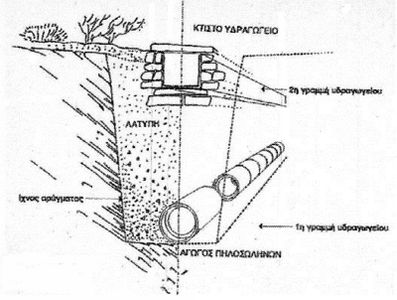 The area of Flerio was en still is also rich in water springs, which still feed the lush vegetation of the site. Considering that the type of rocks in this area (marble and schist) are not very good in capturign and storing water, this iq quite peculiar. Research of Aikaterini & Sofia Partsinevelou showed that places with a lot of fractures in the crystaline rock are great places to collect and store water, such as here.

Since this area was a great place for water, it is not so surprising that the goddess of fertility was worshipped here in the area of these ancient water springs.

And it is not much of a surprise that the first aqueduct were buitl here tapping water from these sources and conveying the water from the Flerio area to the capital of Naxos, 11 km long. The aquaduct was constructed in the late 6th century BCE and equipped with pipes. In the first century CE it was replaced by a masonry channel coated with water proof plaster, maintaining the course of its predecessor. In the 4th century CE this masonry channel was replaced by a new one, running on or near the line of the former. This time the bottom of the channel was covered with square flat bricks. Excavated fragments of pots etc. show that the aqueduct remained in function until the 8th c CE. Over 10 sections are now nicely displayed along the main road from Chora - the present capital of Naxos - to Kinidaros. One should start in the Flerio area, east of Mili, close to the place where the Kouros of Melanes was found.