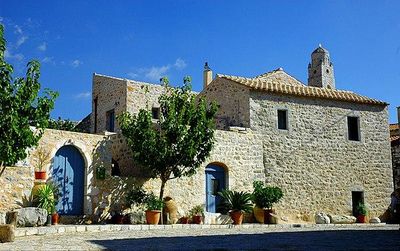 The word Areopoli, which means "city of Ares", the ancient Greek god of war, became the official name in 1912. It was the seat of Oitylo municipality. The Greek War of Independence was started at Areopoli on March 17, 1821 by Petros Pierrakos, also known as Petros Mavromichalis, the last bey of Mani. Now Areopoli has grown into a flourishing town. Its tower houses, constructed with field stones, are distinct from the traditional blue and white buildings that characterize many Greek villages.

Areopoli is situated near the west coast of the Mani Peninsula, 1.5 km from its port Limeni. It is 20 km southwest of Gytheio. There is lively open air market in the main square each Saturday, with a lot of local producers present.