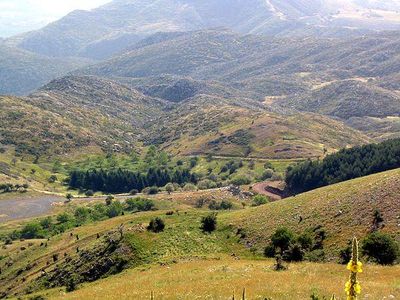 Mount Lykaion is a mountain in Arcadia, Greece. Lykaion has two peaks: Stefani to the north and St. Ilias to the south where the altar of Zeus is located.
The northern peak is higher, 1,421 m, than the southern, 1,382 m . Mount Lykaion was sacred to Zeus Lykaios, who was said to have been born and brought up on it, and was the home of Pelasgus and his son Lycaon, who were said to have founded the ritual of Zeus practiced on its summit. This seems to have involved a human sacrifice and a feast in which the man who received the portion of a human victim was changed to a wolf, as Lycaon had been after sacrificing a child. The altar of Zeus consists of a great mound of ashes with a retaining wall. It was said that no shadows fell within the precincts and that any who entered it died within the year. The sanctuary of Zeus played host to athletic games held every four years, the Lykaia.