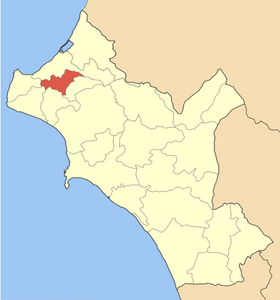 Andravida is a town and a former municipality in Elis, in the northwest of the Peloponnese peninsula of Greece. Since the 2011 local government reform it is part of the municipality Andravida-Kyllini, of which it is a municipal unit. The municipal unit has an area of 40.728 km2. Its population is about 4,300. The town was the capital of the Frankish Principality of Achaea in the late Middle Ages.

Andravida is located in the plains of northwestern Elis, at about 7 km from the Ionian Sea coast. It is 3 km south of Lechaina, 6 km north of Gastouni, 30 km northwest of Pyrgos and 55 km southwest of Patras.