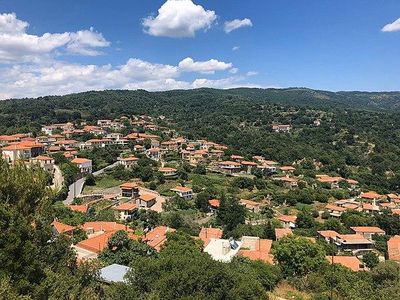 Karyes is a village of the Peloponnese peninsula, which is located in the southern part of Greece. The Peloponnese is made up of a number of states and Karyes belongs to the state of Laconia in which Sparta is the capital. Karyes gets its official name from the word ‘walnut’ due to the village having many walnut trees and has been spelled a number of ways such as Karyes, Karyai, Karya, Caryes, Caryai and Caryae. It should not be confused with some other villages in Greece which go by the same name such as Caria of Asia Minor, Karyes, Mount Athos, Karyes, Pieria, Karya of Argos, and Karyes of Chios. Karyes also goes by the name of Arahova which was thought to have originated from the Slavic word for walnut. The village of Karyes is the birthplace of the six caryatid maidens which are featured in architecture in the place of columns on the ancient and world famous Erectheion of the Acropolis.
The original caryatid maidens of the Acropolis were replaced by replicas due to air pollution and five of the six originals are now housed in the Acropolis Museum in Athens. The sixth caryatid was stolen by the command of British Lord Elgin and is now held in the British Museum in London. There are two different views for the meaning behind the caryatid maidens in the literature, the first being a maiden dancer from the village of Karyes and the second an imprisoned slave. Geographer Pausanias’ historical account from the second century AD discusses the history behind the Caryatid statues as representing dancers from Karyes. He states every year in Karyes the Lacedaemonian, virgin dancers would perform the dance of ‘caryatis’ around a statue of the goddess Artemis Caryatis at a summer festival called Karyateia. The original caryatids were dancers from Karyes but later, any female from the Laconian area who performed this dance was also called a caryatid. Pausanias also mentions a temple of Artemis located in Karyes and says that she was sacred in this area.