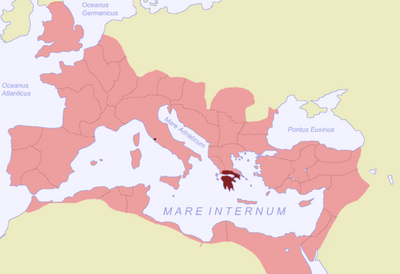 Achaea or Achaia , was a province of the Roman Empire, consisting of the Peloponnese, Attica, Boeotia, Euboea, the Cyclades and parts of Phthiotis, Aetolia-Acarnania and Phocis. In the north, it bordered on the provinces of Epirus vetus and Macedonia. The region was annexed by the Roman Republic in 146 BC following the sack of Corinth by the Roman general Lucius Mummius, who was awarded the cognomen "Achaicus" . It became part of the Roman province of Macedonia, which included the whole of mainland Greece.

Achaea was a senatorial province, thus free from military men and legions, and one of the most prestigious and sought-after provinces for senators to govern. Athens was the primary center of education for the imperial elite, rivaled only by Alexandria, and one of the most important cities in the Empire. Achaea was among the most prosperous and peaceful parts of the Roman world until Late Antiquity, when it first suffered from barbarian invasions. The province remained prosperous and highly urbanized however, as attested in the 6th-century Synecdemus.