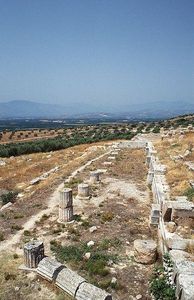 The Heraion of Argos is an ancient temple in Argos, Greece. It was part of the greatest sanctuary in the Argolid, dedicated to Hera, whose epithet "Argive Hera" appears in Homer's works. Hera herself claims to be the protector of Argos in Iliad IV, 50–52): "The three towns I love best are Argos, Sparta and Mycenae of the broad streets". The memory was preserved at Argos of an archaic, aniconic pillar representation of the Great Goddess. The site, which might mark the introduction of the cult of Hera in mainland Greece, lies northeast of Argos between the archaeological sites of Mycenae and Midea, two important Mycenaean cities. The traveller Pausanias, visiting the site in the 2nd century CE, referred to the area as Prosymna .

The temenos occupies three artificially terraced levels on a site above the plain with a commanding view. Most of the remains at the site date from the 7th to the 5th centuries B.C. The Old Temple, destroyed by fire in 423 BCE, and an open-air altar stood on the uppermost terrace. Following the fire, the New Temple was rebuilt on the middle terrace; the architect was Eupolemos of Argos, according to Pausanias. Pausanias, who visited the site in the second century CE, describes the sculptures it contained at that time, including the cult statue, the famous ivory and gold-plated bronze sculpture of Hera by Polykleitos. Pausanias wrote: