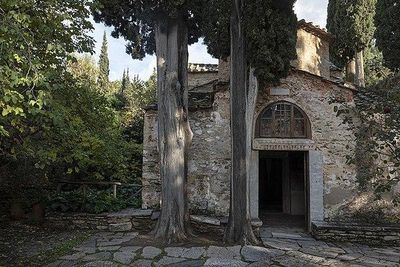 The Kaisariani Monastery is an Eastern Orthodox monastery built on the north side of Mount Hymettus, near Athens, Greece.

The monastery was probably established in Byzantine times in ca. 1100, which is the date of construction of the surviving church . Nevertheless, the site has a far longer history as a cult center: in Antiquity, it was probably a site dedicated to Aphrodite, before being taken over by Christians in the 5th/6th centuries. Remains of a large early Christian basilica lie to the west, over which a smaller church was built in the 10th/11th centuries.