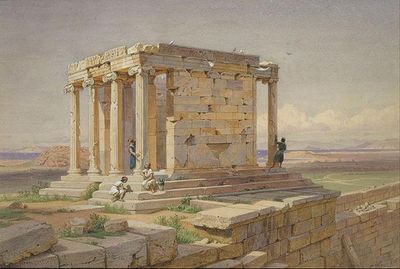 The Temple of Athena Nike is a temple on the Acropolis of Athens, dedicated to the goddess Athena Nike. Built around 420 BC, the temple is the earliest fully Ionic temple on the Acropolis. It has a prominent position on a steep bastion at the south west corner of the Acropolis to the right of the entrance, the Propylaea. In contrast to the Acropolis proper, a walled sanctuary entered through the Propylaea, the Victory Sanctuary was open, entered from the Propylaea's southwest wing and from a narrow stair on the north. The sheer walls of its bastion were protected on the north, west, and south by the Nike Parapet, named for its frieze of Nikai celebrating victory and sacrificing to their patroness, Athena Nike.

Nike means "victory" in Greek, and Athena was worshipped in this form, representative of being victorious in war. The citizens worshipped the goddess in hopes of a successful outcome in the long Peloponnesian War fought against the Spartans and their allies.