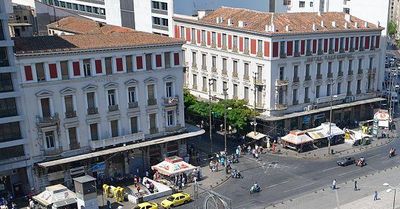 Omonoia Square is a central square in Athens. Forming the centre of Omonoia. It marks the northern corner of the downtown area defined by the city plans of the 19th century, and is one of the city's principal traffic hubs. It is served by Omonoia train station.

Omonoia Square is one of the oldest squares in the city of Athens and an important shopping centre. It is located at the center of the city at the intersection of six main streets: Panepistimiou, Stadiou, Athinas, Peiraios, Agiou Konstantinou Street and 3rd Septemvriou Street.