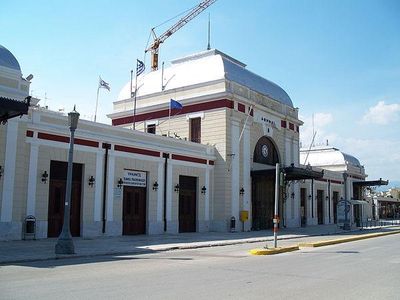 Athens railway station is the main railway station of Athens, and the largest station in Greece. Located in the central quarter of Kolonos, it resulted from the merger of the city's two main railway terminals—the Larissa Station of the Piraeus–Platy railway towards central and northern Greece, and the Peloponnese Station of the Piraeus–Patras railway linking Athens with the Peloponnese. It is still colloquially known as Larissa Station, which is also the name of the adjacent Metro station.

Inaugurated in 1904, the station was named after the city of Larissa, then the northernmost city of the Kingdom of Greece and the one nearest the northern terminus of the standard-gauge Piraeus–Papapouli railway. The adjacent Peloponnese Station , inaugurated on 30 June 1884, was served by the metre-gauge Piraeus–Patras railway to the Peloponnese. Closed on 7 August 2005, along with the metre-gauge line between Piraeus and Agioi Anargyroi, its services were transferred to Larissa Station upon the opening of the Proastiakos line to Corinth on 27 September 2005. The final service departed the unmodernized Larissa Station on 4 June 2017, before it was closed for various upgrades including the installation of a railway electrification system. The upgraded station was reopened on 30 July 2017. The Athens Metro station, inaugurated on 28 January 2000, lies underground and is served by Line 2 between Anthoupoli and Elliniko.