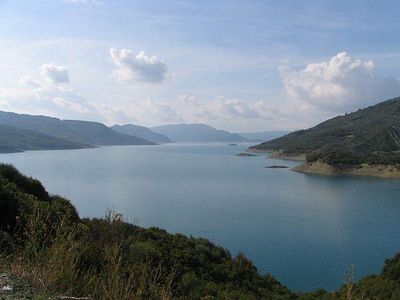 Lake Kremasta is the largest artificial lake in Greece. The construction of Kremasta Dam was completed in 1965 concentrating waters from four rivers: Acheloos, Agrafiotis, Tavropos and Trikeriotis. The water that is accumulated in the artificial lake is about 3.8 cubic kilometres . It prevents flooding of the Acheloos, and supplies electricity to the national grid during peaks of demand. The power station at the dam is the biggest hydroelectric plant in Greece . It was constructed in 1966 and is owned by the Public Power Corporation of Greece . At the time of its construction, it was the largest earth-filled hydroelectric project in Europe.
The lake is located on the borders of Aetolia-Acarnania and Evrytania. There are two bridges over the lake . The water of the lake penetrates along the beds of the rivers mentioned above, and forms a lot of fiords and small islands. The municipalities with shores on the lake are Agrinio and Amfilochia in Aetolia-Acarnania, and Agrafa and Karpenisi in Evrytania.