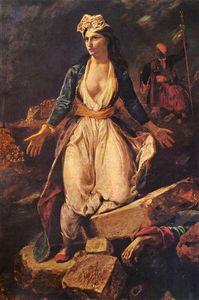 The Third Siege of Missolonghi was fought in the Greek War of Independence, between the Ottoman Empire and the Greek rebels, from 15 April 1825 to 10 April 1826. The Ottomans had already tried and failed to capture the city in 1822 and 1823, but returned in 1825 with a stronger force of infantry and a stronger navy supporting the infantry. The Greeks held out for almost a year before they ran out of food and attempted a mass breakout, which however resulted in a disaster, with the larger part of the Greeks slain. This defeat was a key factor leading to intervention by the Great Powers who, hearing about the atrocities, felt sympathetic to the Greek cause.

Missolonghi was first besieged by the Ottomans in 1822, then in 1823. In April 1824, Lord Byron died in Missolonghi of an illness, adding to the fame of the city.