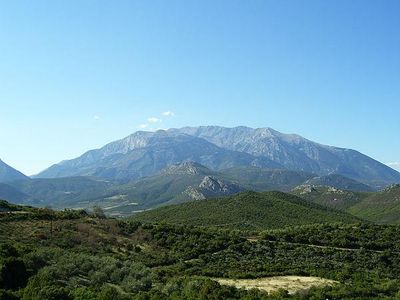 Mount Parnassus is a mountain of limestone in central Greece that towers above Delphi, north of the Gulf of Corinth, and offers scenic views of the surrounding olive groves and countryside. According to Greek mythology, this mountain was sacred to Dionysus and the Dionysian mysteries; it was also sacred to Apollo and the Corycian nymphs, and it was the home of the Muses. The mountain was also favored by the Dorians. It is suggested that the name derives from parnassas, the possessive adjective of the Luwian word parna meaning house, or specifically temple, so the name effectively means the mountain of the house of the god.
Parnassus is one of the largest mountainous regions of Mainland Greece and one of the highest Greek mountains. It spreads over three municipalities, namely of Boeotia, Phthiotis and Phocis, where its largest part lies. Its altitude is 2,457 meters and its highest peak is Liakouras. To the Northeast it is connected to Giona and to the south with Kirphe. Its name is due to the homonymous hero of the Greek mythology, son of Cleopompus and Cleodora, who had built on the mountain a city which was destroyed in the Deluge of Deukalion. Etymological analysis, however, shows a prehellenic origin of the name, relating it to the Pelasgians, and it appears to be from the Anatolian language Luwian.
The mountain is delimited to the east by the valley of the Boeotian Kephissus and to the West by the valley of Amfissa. The geological particularity of Parnassus is its rich deposits of bauxite, which has led to their systematic mining since the end of the 1930s, resulting in ecological damage to part of the mountain.