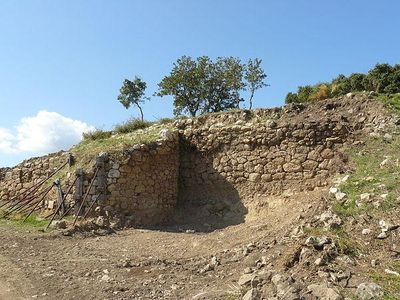 Aphidna or Aphidnae or Aphidnai was one of the twelve ancient towns of ancient Attica. It was celebrated in the mythical period as the place where Theseus deposited Helen of Troy, entrusting her to the care of his friend Aphidnus. When the Dioscuri invaded Attica in search of their sister, the inhabitants of Deceleia informed the Lacedaemonians where Helen was concealed, and showed them the way to Aphidna. The Dioscuri thereupon took the town, and carried off their sister. We learn, from a decree quoted by Demosthenes, that Aphidna was, in his time, a fortified town, and at a greater distance than 120 stadia from Athens. As an Attic deme, it belonged in succession to the tribes Aeantis, Leontis, Ptolemais, and Hadrianis.
This article incorporates text from a publication now in the public domain: Smith, William, ed. . "Aphidna". Dictionary of Greek and Roman Geography. London: John Murray.