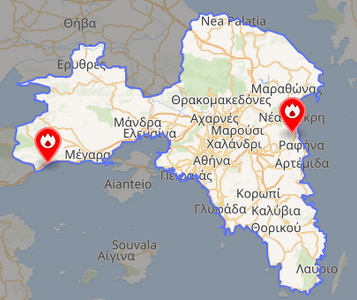 A series of wildfires in Greece, during the 2018 European heat wave, began in the coastal areas of Attica in July 2018. As of 15 December, 100 people were confirmed dead. The fires were the second-deadliest wildfire event in the 21st century, after the 2009 Black Saturday bushfires in Australia that killed 180.

Over 700 residents have been evacuated or rescued, mainly from the seaside settlements located north of the port town of Rafina, namely Kokkino Limanaki and Mati, where rescuers found 26 corpses trapped just metres away from the sea, apparently hugging each other as they died. Boats also recovered corpses from the water, and rescued hundreds of people from beaches and the sea. Ten people drowned when the boat rescuing them from a hotel in Mati capsized. Μore than 4,000 residents were affected by the wildfires.